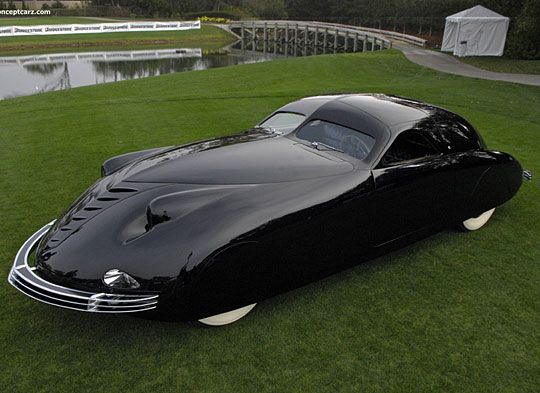 The 1938 Phantom Corsair came out of the fertile mind of young Rust Heinz, car nut and the son of HJ. Heinz of “57 Varieties” fame. Leaving his naval architecture studies at Yale for Pasadena, California, he set up an industrial design studio. His dream was to build his own car, but his family wouldn’t provide financing — so his aunt in Pasadena did.

The sleek envelope design of the 1938 Phantom Corsair was Heinz’s, developed with clay models. B&S provided much of the finer detail, such as the delicate center peak running the length of the car and the subtle rounding of the rear section. Body panels were made of hand-beaten aluminum and fitted over a tubular frame. Features embraced a louvered nose, fully skirted wheels, totally flush fenders, lack of running boards, extremely small windows (even for its time), telescoping bumper supports, and unique headlights.

But when all is said and done, it was the 1938 Phantom Corsair’s streamlined styling that stunned all who saw it. And many did, for it appeared on the March 1938 cover of Motor Age and in the movieThe Young in Heart. Heinz also made arrangements to display the car at the 1939 New York World’s Fair. Alas, he died following a car crash in July 1939; he was only 25 years old. Thus ended his dream to place the Phantom Corsair into small-scale production. A brochure had been prepared and the price set at $14,700, but at nearly triple the price of a Cadillac V-16 sedan, no orders materialized.

Over the years, the 1938 Phantom Corsair saw many owners, among them TV star Herb Shriner, who owned it from 1951-1970 and had it customized. Now restored to its original form, its home is the William F. Harrah Foundation, National Automobile Museum in Reno, Nevada. Its place in history is assured — it was arguably the most futuristic car built in the Thirties.